Imagine going into a restaurant today and not being able to order fresh vegetables and organic salads.  We owe the fact that we can – and have been able to for the past 35 years – to one of the most remarkable people, Bill Galt, Founder of The Good Earth Restaurant chain, and the pioneer of serving healthy food in restaurants. He was also a great mentor, business colleague, supporter and close friend of mine for many, many years.

Very, very sadly, Bill passed away on August 2, 2018 in Reno, Nevada at 89 years old, but his legacies of healthy eating and collaborative business practices live on through all the millions of people he touched and the transformation of the dining out experience that he began, as you’ll read here.

Bill is in many ways responsible for helping me give a voice to, and build a career around, socially-responsible business practice through our work together over the years.  He launched The Good Earth Restaurants in 1975 after working with Colonel Sanders as one of the original Kentucky Fried Chicken (KFC) franchisees. Yes, that Colonel Sanders, who is known for greasy, fried chicken (though according to Bill, Sanders almost never ate it…read on).

The Good Earth Restaurants proved for the first time that it was financially viable to serve healthy food in restaurants, even though food preparation was much more labor-intensive than for the typical restaurant menu at the time. 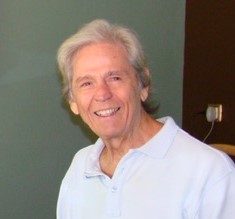 As a result of Bill’s success with The Good Earth, it is now commonplace for restaurants across the country in nearly every genre to serve healthy options.  The National Restaurant Association even has a “Healthy Food Dining” directory now.  The approximately $40 million organic food movement could be traced to the success of The Good Earth Restaurants, because it demonstrated, and increased the demand for clean, “natural,” hormone-free meats, and fresh vegetables and fruits.  A trillion dollar health food industry sprung up around The Good Earth, from farmers to suppliers to supermarkets to online direct-to-consumer sources.

In 2016, National Restaurant Association research found that, “more than seven in 10 adults are trying to eat healthier at restaurants than they did two years ago.  Restaurant operators are taking notice, with more than eight in 10 saying their guests pay more attention to the nutrition content of food now than they did two years ago.  Strong majorities of consumers have noticed that restaurants feature more nutritious options on menus now compared to two years ago.”

The Good Earth Tea that Bill developed in his home kitchen remains one of the most popular teas of all time and is available in markets nationwide, and many foods such as  alfalfa sprouts, jicama, tofu and snow peas that The Good Earth first introduced to the average American diner are now considered mainstream. 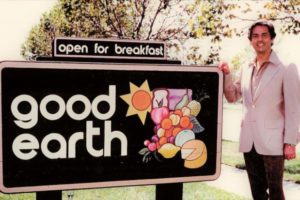 The Good Earth started at a small 22-seat restaurant in Reno, Nevada, where Bill honed the recipes, and eventually earned the distinction of being the largest chain of health food restaurants in history, according to the National Restaurant News.  It grew to a total of about 40 stores nationwide serving approximately 10 million meals per year and was acquired by General Mills in 1980.  You can still dine in The Good Earth, in Minnesota, albeit with a slightly revised menu.

Bill told The San Diego Tribune in 1985 and audiences worldwide that his inspiration for The Good Earth came from seeing Col. Sanders “on the run for 16 hours” a day well into his 60’s eating mostly fresh fruits and vegetables and taking a multitude of vitamin supplements each day, while at the same time Bill’s other restauranteur friends were dying in their 40’s.

With the intention to “change the eating habits of Americans” by developing a healthy food restaurant alternative to traditional dining that could be a successful chain, Bill began researching and experimenting with whole grains, mostly vegetarian dishes, hormone-free meats, natural sugars, and spices from around the world (eliminating MSG, monosodium glutamate, which was pervasive at the time – the elimination of which was yet another trend Bill pioneered). 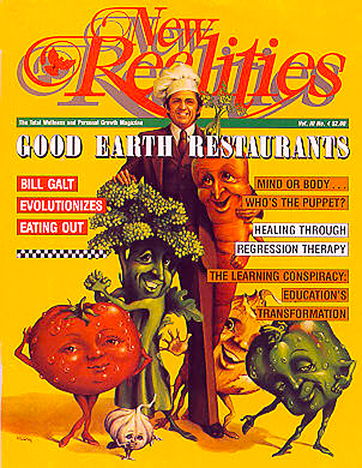 As the Wall Street Journal wrote in its obituary, “Six-foot-four and lean, Mr. Galt was ahead of his time in spotting a market opportunity in natural ingredients and never lost his devotion to unprocessed foods. He hiked, swam in the Pacific Ocean and used an antigravity contraption that, he said, promoted spinal health, circulation and perhaps even hair growth.”
Part Cherokee, Bill first experienced working in restaurants in his parents’ Cherokee Inn restaurant and lodge on the Cherokee Indian Reservation in the Smokey Mountains of North Carolina. He was born William Andrew Galt on May 31, 1929 in Cartersville, GA, and learned to appreciate the importance of farmers by working on his parents’ dairy farm there.

After attending the University of Miami, just prior to graduation, Galt went west and worked in Lawry’s Prime Rib in Los Angeles and then at The Golden Nugget Casino in Nevada, where he met Colonel Sanders.  According to family legend, Bill and some of his fraternity brothers once hijacked an ROTC tank and drove it across campus (which apparently played in a role in his leaving school a few credits shy of graduation).

In addition to changing our eating habits in restaurants, Bill also wanted to do business differently than the authoritarian way it was being done at the time.  So, he founded The Good Earth Restaurants on the premises of what he described as “conscious” and “win-win” business practices and taught these as a cofounder of the Burklyn Business School training programs, with his good friend Marshall Thurber and Buckminster Fuller (both of whom I knew well too).

Bill was one of the “fathers” of what is now estimated to be a $9.9 billion dollar self-improvement and conscious business industry, and his friends include some of that industry’s luminaries, including Jack Canfield, of “Chicken Soup for the Soul” fame, who invited Bill to be one of the founding members of his Transformational Leadership Council.

After selling The Good Earth Restaurants to General Mills, Bill traveled the world and launched The Good Health Centers to promote healthy lifestyles, and Peace Leaders International (PLI), a think tank.   Employing scientists, scholars, and environmentalists, PLI’s mission was to identify solutions to the myriad challenges facing specific eco-systems and the world, including global conflict, extreme poverty and the mistreatment of animals, and to leverage citizen diplomacy to address them. Bill leveraged his well-heeled connections to help fund it, including Arianna Huffington. He served on Mikael Gorbachev’s Peace Counsel and met with Fidel Castro on peace initiatives, among others.

In his early years, Bill was a boxer and later worked as a missionary with Moral Rearmament in San Francisco., before getting into the restaurant business.  He was also in politics, including serving as City Councilman of Sparks, Nevada, and running unsuccessfully for the U.S. Senate, Lt. Governor and Mayor of Sparks.  His family told me that he originally became active in politics because he wanted to see that the casinos paid their fair share of taxes, which he saw they were not doing when he worked in the Nevada restaurant business.

Bill is survived by his wife Gail Weaver, an exercise physiologist and international peace activist (and dear friend of mine), who will continue his work.   They married in 2004 and were partners for approximately 30 years.  They made their home in Mexico the past 20 years, where Bill played a pivotal role in building Mexico’s Slow Food Movement in Mérida, Yucatan to be the largest one in Mexico. This includes his work as a key member of the board and bringing together organic farmers from around the region weekly.  Slow Food is defined as “fresh and healthy, free of pesticides and chemicals, and produced and accessed in a way that’s beneficial to all – from the farmer to the eater,” according to Slow Food USA.   Bill even met with the Minister of Agriculture in Mexico City a few months before his death to allow import of a pro-biotic product from Singapore to increase crop productivity for organic farmers.

Bill was previously married to Nancy O’Donnell Galt from 1953 to 1989 (ending in divorce), who was a co-founder of The Good Earth and with whom he had four children, Marialice Galt, Esq., Lisa Lee Galt, Bill Galt, Jr, and Nancy Galt, Jr.  Bill is survived by his four children and Gail, and by two grandchildren, Maraya Jones and Jacob Keesee, and his and Gail’s long-time Mexican poodles, Willy and Kiki.

I cannot express fully how grateful I am to have had Bill in my world, and as such a close friend, business colleague and mentor, especially for so many, many years.  He was truly an inspiration and reminds us all to use every moment deliberately with purpose, to do our parts to make the world 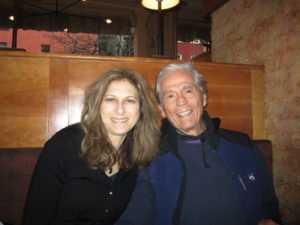 a better place for everyone (and every living thing), and to appreciate each other often and openly.

In memory, contributions may be sent to the nonprofit William Galt Organic Farmers Scholarship Fund, in care of The Law Offices of Diaz and Galt, 443 Marsh Avenue, Reno, Nevada 89509.

Click on these links to see Galt’s obituaries in the AP, which also was published in many local and regional media, The Wall Street Journal and The National Restaurant News