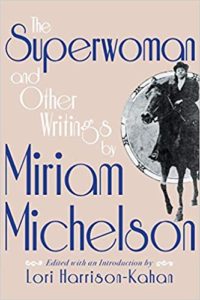 Here are a few of the endorsements she received:

This is a strong reminder that women worked hard for the right to tell the stories of our nation in their own voice. I am humbled by the women who came before me as I read about their struggles and perseverance. Especially today, as so many women fight for recognition and respect, it is important to look back at the long road we have already traveled and gain strength.

Eleanor Clft, Columnist, The Daily Beast, and author of “Founding Sisters and the 19th Amendment” and “Madam President”:

Thanks to Harrison-Kahan for bringing to light in this extraordinary book a body of work that honors the one-hundredth anniversary of women getting the vote, and introduces all of us today to a journalist whose writing helped make suffrage possible. A marquee byline in her time, this collection of Miriam Michelson’s work includes her newspaper coverage of a Women’s Congress in 1895 and her 1912 novella, Superwoman, which served as source material for ‘Wonder Woman.’ As an independent, single, professional woman, Michelson was ahead of her time in imagining what women can do.

Short version:
One of the most striking and colorful leaders who fought so long and so hard to secure voting rights for women, Miriam Michelson jumps out of the pages of this new and valuable work by Harrison-Kahan. Thanks at long last to the indefatigable effort by Harrison-Kahan and Miriam’s great-great niece, Joan Michelson, the story of Miriam and the roles she played in advancing the suffragette movement—constantly keeping it in the headlines— surges back to life, showing what can be done through courage and commitment.

Long version:
When America this August, 2019 begins centennial celebrations of an epic achievement in our past — passage of the 19th amendment — we will rediscover the extraordinary leaders who fought so long and so hard to secure  voting rights for women.  One of the most striking and colorful. Miriam Michelson, jumps out of the pages of this new and valuable work by Dr. Lori Harrison-Kahan.

Ms. Michelson was a descendant of a Jewish family who fled persecution in their native Poland and arrived in the United States in the 1850s.  Like a good number of other Jews, her family moved westward until settling in Nevada.  There Miriam grew up and became a writer, first as a journalist and then as a novelist.  Her first novel was so popular that it was turned into a play and became the basis for a movie with Mary Pickford.  And Miriam had a lot of the Wild West in her: brazen, liberated, no stranger to saloons, and an especially sharp eye for discrimination against women.

Her writings from the frontier made her a national figure, so much so that when her oldest brother Charles was the first American to win a Nobel Prize in science, the press described him as “Miriam’s brother”.  Her youngest brother Charles was a chief press agent for the Democratic Party under FDR but he too lived in Miriam’s shadow
Now, thanks at long last to the indefatigable effort by Dr. Harrison-Kahan and Miriam’s great-great niece, Joan Michelson (an accomplished women in her own right and who has written the foreword to this book,) the story of Miriam and the roles she played in advancing the suffragette movement — constantly keeping it in the headlines — surges back to life.

At a moment in our history when women are flooding into the public arena, giving hope that they can lift our public life out of the doldrums, the story of Miriam Michelson and others still to be rediscovered come at a perfect time. They were the pioneers of one of the great social movements in our history, showing what can be done through courage and commitment.

Miriam Michelson’s voice comes roaring back from the Progressive Era, full of rollicking stories about Amazons, girl thieves, and feminist radicals. Whether she was covering news or writing fiction, Michelson modeled the kind of public engagement our own era desperately needs. Lori Harrison-Kahan has reintroduced a fierce, funny writer we should never have forgotten.

Miriam Michelson’s journalism about women, ethnic minorities, and the West and her prescient speculative fiction make for fascinating reading for anyone interested in American studies, print cultural studies, journalism, or gender studies. Harrison-Kahan has performed a monumental service to these fields by recovering—with such attentiveness and care—the works of this popular, now forgotten Progressive Era frontier feminist author.