“The most interesting figure in San Francisco to-day (sic), compels such respect for her mental qualification…there is nothing weak or temporizing about her….I don’t doubt that she can be a relentless enemy.”

These are the words my great-great aunt, the prominent suffrage reporter Miriam Michelson, used to describe Mary Ellen Pleasant, a black successful real estate magnate, entrepreneur and abolitionist in 1897 in the San Francisco Call.  They could just as easily have been written about the newly-announced Vice Presidential nominee-designate, California Senator Kamala Harris.

Pleasant became known as “The Mother of Civil Rights in California” for the civil rights cases she took to the courtroom in the late 1800’s, including one that was apparently cited in a case as recently as the 1980’s.

Women did not yet have the right to vote when Pleasant engaged those battles.

Pleasant was “an enigmatic black abolitionist and entrepreneur….who became a larger- than-life figure in the history of nineteenth century San Francisco for her financial acumen, civil rights activism and influence…,”  as Lori Harrison-Kahan wrote in her recent book, “The Superwoman and Other Writings by Miriam Michelson,” (full disclosure: I wrote the foreword).

Aunt Miriam’s reporting and turning to Pleasant as a source evolved into a friendship, Harrison-Kahan explains.

An uncommon friendship in the midst of a fractured suffrage movement

“Straight up racism on the part of some suffragists who felt that African-Americans were not worthy” of the vote led to tremendous conflicts between white and black women at the time, as Liette Gidlow of Wayne State University told the Wall Street Journal recently.
Black and white women clashed on the best strategies for achieving passage and ratification of what became the 19th Amendment giving women the right to vote. Mostly because it required winning over the votes of hundreds of white men, first in Congress and the White House, and then in state legislatures across the country.

Fierce women fighting for civil rights and justice – or advancement of any kind – have historically been vilified for what Miriam Michelson called “Unladylike Behavior,” just as Kamala Harris has been

There is no doubt that Harris’s tenure as California Attorney General (and prior to that as San Francisco District Attorney) is pock-marked with controversy. Some people in the black community questioned her support for their rights during the Democratic primary in 2019, because of dissatisfaction with her criminal justice policies as AG, including about police brutality.

But it seems that a majority of the African-American communities and women’s communities are coming together to celebrate the elevation of the first woman of color to contend for the second-highest job in the land alongside former Vice President Joe Biden in his bid to be elected the next President of the United States this November.

Women taking unpopular stances – having the audacity to stick their heads up, to speak up, to speak truth to power, to ask for the job or the raise, and to speak loudly enough to be heard – have been vilified throughout history and continue to be in office, boardrooms, classrooms and C-suites.  It’s time to stop. 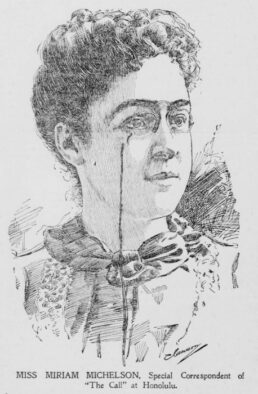 In 1911, Aunt Miriam gave a speech to the College Equal Suffrage League called, “The Reproach of Unladylike Behavior,” Harrison-Kahan wrote, where Aunt Miriam said, “Now it is most ladylike to stand up, face things as they are, and accept them like a man,” and “by her fun and irony warmed the audience into rippling good humor’ as she made her case for suffrage.” Four months after this speech, California voters made it the fourth state to grant women the right to vote.

Commemorating the 19th Amendment centennial with a giant, healing step for womankind

As we commemorate the centennial of the 19th Amendment giving women the right to vote this month, Biden choosing Harris is an opportunity for a healing moment for the country and for American womankind.

We are wise to remember the winding road of the alliance between black women and white women reflected in my great-great aunt’s unlikely friendship with Mary Ellen Pleasant so very long ago.

From the suffragist movement’s split between black and white women – to the 19th Amendment’s passage finally giving women the vote, to Congresswoman Shirley Chisholm’s failed candidacy for the presidency in 1972, to Hillary Clinton’s 2016 loss in part due to a lackluster turnout of the African-American vote – the relationship between the rights of black women and white women has been fraught (not to mention going back 400 years to black women being enslaved by white women and their white husband-landowners).

With the support being shown so far for Kamala Harris as Biden’s VP from so many prominent black and white women and their organizations, perhaps this historic choice represents a moment of healing, when the white and black women of 2020 are coming together for a higher purpose, just as these two feisty women from California, Mary-Ellen Pleasant and my great-great aunt Miriam Michelson, did 123 years ago.

It seems like a fitting way to commemorate 100 years of women having the right to vote.

This first appeared on Forbes.com. For more about Miriam Michelson and the role of women journalists in the suffrage movement, including a video of an event about it at The Newseum, click here.